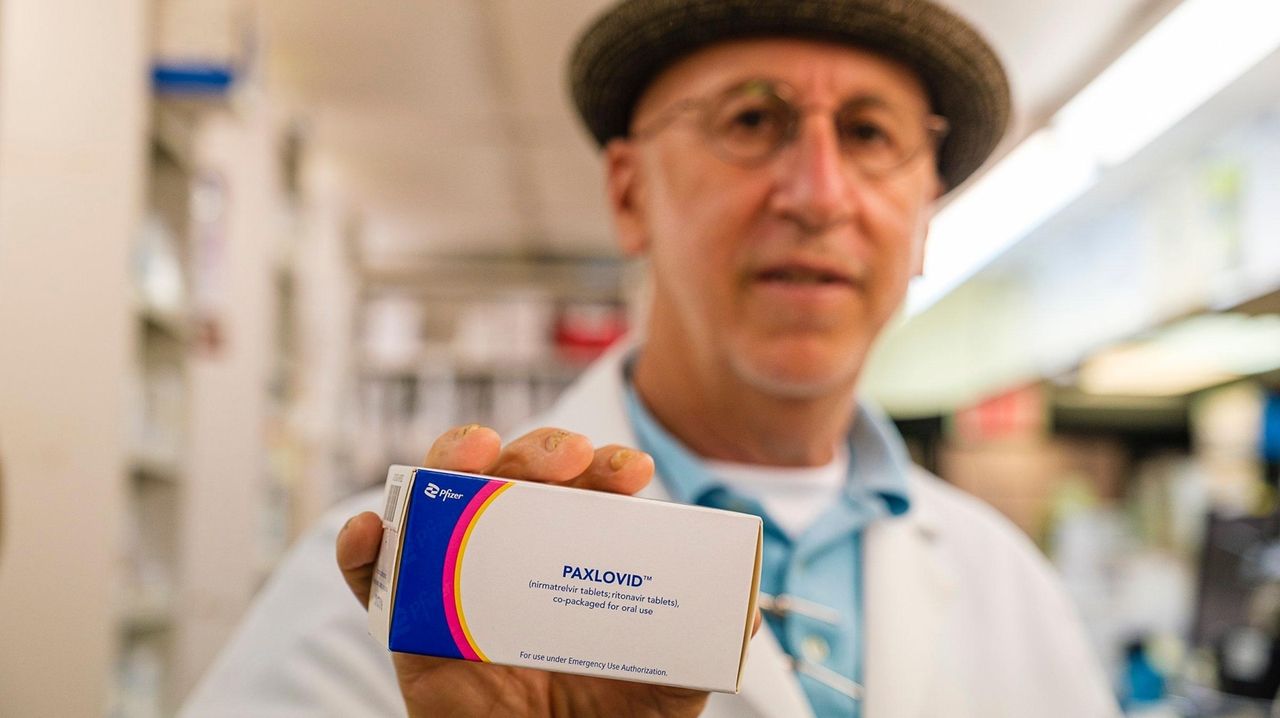 Paxlovid, a drug that dramatically reduces the chances of hospitalization or death for those at high risk of severe COVID-19, is now widely available after months of shortages. But many Long Islanders are still unaware of it, and some are nervous about taking it.

The Food and Drug Administration authorized Paxlovid, made by Pfizer, in December. Clinical trials showed the medication reduced the risk of hospitalization or death from COVID-19 by 88% in people 60 or over and in adults of any age with certain high-risk medical conditions. The prescription-only drug must be taken within five days of developing COVID-19 symptoms.

Until recently, supply of the medication had been limited.

Chevan Whitfield, who works at a blood lab, said she had never heard of Paxlovid. She believes the drug should be advertised more.

“If it’s definitely something to help as far as attacking the virus and making people get well that contracted the virus, I think people should be aware of it,” said Whitfeld, of Hempstead. She plans to tell high-risk family members about the drug.

Howard Jacobson, owner of Rockville Center Pharmacy, said he had tried for months to obtain Paxlovid, but only got his first shipment of 20 treatment courses earlier this month.

“It was a long time waiting,” he said. “We kept placing orders.”

Jacobson said his pharmacy since he has received only four prescriptions for the drug.

“Only a minority of the people who might benefit are getting it at the present time,” said Dr. Bruce Farber, chief of public health and epidemiology at Northwell Health and an infectious disease specialist who regularly has prescribed Paxlovid.

The drug is only for those deemed at high risk of severe COVID-19, but the FDA leaves the judgment on prescribing to the health care provider. Those the Centers for Disease Control and Prevention says are at higher risk include people 65 and older, those with certain medical conditions, many people from racial and ethnic minority groups, and people with disabilities.

Farber said people in low-income and other vulnerable communities are among those who may be least able to obtain the drug or know about it.

The drug cannot be taken more than five days after symptoms begin, but many people don’t have physicians they can rapidly turn to, he said.

“We have to bend over backwards in areas where there are socioeconomic problems that prevent people from having quick access,” he said.

David Nemiroff, president and CEO of Long Island FQHC, which runs six nonprofit health centers, said its employees are spreading the word about Paxlovid. But many people find out they have COVID-19 through home tests, so “they’re not coming to the doctor,” he said.

Sometimes when people who qualify for Paxlovid seek medical care for COVID-19, it’s past the five-day deadline, he said.

Most Long Island FQHC patients had been unaware of Paxlovid until a health care provider told them about it, Nemiroff said. Wider promotion of the drug, including in languages ​​other than English, is needed, he said.

The federal website shows more than 1 million Paxlovid treatments available nationwide, a number that has risen significantly in recent weeks as production has increased and the federal government ships it to states, community health centers and pharmacies.

There are several hundred places on Long Island with the drug, federal data shows. Some are “test-to-treat” locations in which prescriptions can be written on-site. At least 669,000 treatment courses had been administered nationwide as of Tuesday, data shows.

The federal government pays for Paxlovid. Health care providers may charge for assessments or COVID-19 testing, but Medicare, Medicaid and most private insurers fully cover those costs, a US Department of Health and Human Services spokesman said in an email.

‘We’re still getting some resistance’

Ann Huseman, 61, of Rockville Centre, said she would avoid Paxlovid if she gets COVID-19 because the medication is “too new.” She is unvaccinated, because she believes the vaccine is too new.

“I’ll be wearing a mask forever, I guess,” she said.

Nemiroff said although most of his organization’s high-risk patients told about Paxlovid want to take it, “We’re still getting some resistance. When we say, ‘Would you like us to get you the medication?’ they say, ‘I don’t trust it.’ ”

Paxlovid is not for everyone, the FDA said. There are a number of other medications that Paxlovid can’t be combined with, people with severe liver and kidney problems shouldn’t take it, and it’s only for those 12 and older weighing at least 88 pounds. There are several potential side effects, including an altered sense of taste, diarrhea, increased blood pressure and muscle findings.

The Food and Drug Administration authorized the drug Paxlovid to reduce the chance of hospitalization or death in people at high risk of severe COVID-19. Among those the Centers for Disease Control and Prevention considers at higher risk are:

Paxlovid consists of two medications, nirmatrelvir and ritonavir, which are taken together twice a day for five days.

Many independent pharmacies don’t carry the drug because it was so difficult to obtain early on due to a preference the federal government gave to large pharmacy chains, said Tom D’Angelo, chairman of the Pharmacists Society of the State of New York and owner of home infusion pharmacies Americare in Garden City and Franklin Square Pharmacy.

The Health and Human Services spokesman declined to confirm whether chain pharmacies were given initial preference.

Spokespeople for CVS and Rite Aid said the drug is now available at nearly all their locations nationwide. A Walgreens spokeswoman said it is at thousands of its locations.

Even when there was a shortage of Paxlovid, other options were available, and still are. One is monoclonal antibodies, which are lab-produced antibodies. But they require an injection or infusion from a health care professional.

Another is Merck’s molnupiravir, which the FDA authorized in December. But, said Dr. Neal Shipley, medical director of Northwell Health-GoHealth Urgent Care, “We made a decision early on not to go with molnupiravir.”

That’s partly because of its much lower effectiveness, he said. Molnupiravir reduced the chance of hospitalization and death by only 30%, far lower than the rate for Paxlovid, clinical trials found.

With Paxlovid now widespread, more than 400 to 500 prescriptions a week have been written for it at Northwell-GoHealth in the past month, Shipley said. All patients who test positive for COVID-19 are asked about factors that could make them eligible for it, he said.

“The more these medicines get out to the community, the better,” he said.

David Olson covers health care. He has worked at Newsday since 2015 and previously covered immigration, multicultural issues and religion at The Press-Enterprise in Southern California.