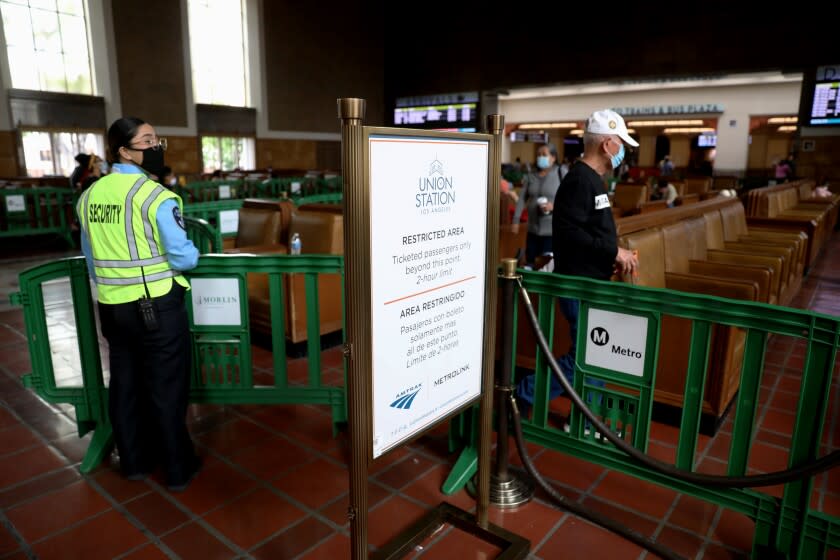 Coronavirus cases are continuing to increase in California, prompting one health official to warn that the state is heading into the next wave of the pandemic.

California has seen its coronavirus case rate rise by 10% in the past week, from 5,700 new cases a day to 6,300 cases a day. Health experts note, however, that the official case numbers may be a significant undercount, given the now-widespread availability of at-home tests — the results of which are not reliably reported to health agencies.

And while still at relatively low levels, statewide coronavirus-positive hospitalizations have risen for eight consecutive days: from 950 to just above 1,100.

The number of COVID-19 patients needing intensive care has also risen from a record low set last month — but still remains at one of the lowest levels of the entire pandemic. It remains unclear, however, how serious this new uptick will be.

“We’re now into our sixth wave” of the COVID-19 pandemic, Dr. Sara Cody, the public health director and health officer for Northern California’s most populous county, Santa Clara County, said at a public meeting Tuesday. “It’s notable because it’s come relatively quickly after resolution of the last surge. We didn’t get much of a lull before cases started rising again.”

California is not alone in seeing the resurgence of the coronavirus. Nationwide, cases have been gradually rising for the past month, and New York City this week raised its COVID-19 threat level and encouraged residents to voluntarily wear masks.

“I know many people are tired of the pandemic. They’re tired of wearing masks and they want life to go back to normal. And they believe that the responsibility now lies with each individual to take actions to minimize their personal risk,” Los Angeles County Public Health Director Barbara Ferrer said Tuesday. “But we do have a collective obligation to take public health measures to protect our most vulnerable.”

Both LA and Santa Clara counties are observing increased reports of outbreaks at workplaces and schools, as well as rising coronavirus levels in their respective sewage systems. Cody said Santa Clara County is seeing a rise in coronavirus-positive hospitalizations, too, with the daily census increasing from 74 in mid-April to 101 on Tuesday.

LA County has seen its case rate rise by 24% in the past week, from nearly 1,700 cases a day to about 2,100 cases a day. That amounts to 142 cases a week for every 100,000 residents. A rate of 100 or more is considered a high rate of coronavirus transmission under the thresholds established by the US Centers for Disease Control and Prevention.

Health officials say the latest uptick is being fueled by an rapidly emerging lineup of Omicron subvariants — each apparently more contagious than the last. The culprit behind last winter’s wave was a subvariant known as BA.1, which emerged in California in November and was 50% more transmissible than the Delta strain that rocked the state last summer.

Its “child,” as Cody referred to a subsequent subvariant called BA.2, is about 30% more transmissible than the parent. And the new BA.2.12.1 subvariant — or “grandchild” of the original Omicron — is 25% more contagious than BA.2.

And officials say yet another pair of Omicron subvariants, BA.4 and BA.5, is responsible for a surge in cases and hospitalizations in South Africa. More troubling still are indications that the two subvariants are able to reinfect people who previously survived an infection with Omicron.

“That would actually be hugely problematic because we generally count on people [who’ve been infected] having at least a couple of months of immunity, but we also count on there being less reinfections within one type, one strain of the virus,” Ferrer said. “And if that’s not going to hold true again, which it might not, then we again have to reemphasize how important it is for people to get vaccinated even if they’ve been infected.”

Vaccines and boosters still reduce the risk of infection, and do a really good job at shortening the risk of severe illness and death, Cody said. Wearing masks in indoor public settings — something California strongly recommends, but does not require — will add another layer of protection.

“The take-home message here is that we do need to continue to pay attention The pandemic is not over, unfortunately. We are continuing to see variants emerge and spread,” Cody said. “Our challenge now is to confront the complacency and significant fatigue that all of us feel, and we just have to continue with a layered approach: masking, vaccination, testing and improving ventilation.”

In LA County, the rising case rates are especially a reason for caution, given that nearly 3 million residents still haven’t completed their primary vaccination series, and hundreds of thousands of vaccinated seniors haven’t received their first booster shot, which data show are important to reduce the risk of severe illness and death.

Despite the recent increases in infections, though, Ferrer expressed some relief that COVID-related hospitalizations, deaths and the test positivity rate remained relatively stable. Over the past week, coronavirus-positive hospitalizations in LA County were basically flat, ticking up from 235 to 248.

“There is always a small lag between cases and hospitalizations and deaths,” she noted. “But more importantly, we think this reflects the protective effects of vaccinations, boosters and, now, therapeutics.”

Still, Ferrer said in a statement Monday that the rise in case rates is worrisome, because it “causes substantial disruption and leads to a vicious cycle of more transmission.”

“With high transmission comes the risk of breeding new variants of concern, the possibility of more people experiencing long COVID and increased risk among those more vulnerable to severe illness should they become infected,” she said.

Orange County is also seeing an increase in cases, from about 280 new cases a day to 330 over the past week, a rate of 73 new cases a week for every 100,000 residents. Hospitalizations remain low, but because it can take two weeks for newly reported coronavirus cases to end up in more severe illness, “we are nervously watching” hospital numbers, said Dr. Clayton Chau, director of the Orange County Health Care Agency.

“Wear masks when you are in public places,” Chau said in a videotaped discussion Tuesday. “If you’re eligible for the vaccine, for the booster, please get it.”

“We are already seeing some long COVID cases [among people] that may have not had symptoms in the beginning, but over two, three months later, they may actually develop symptoms that look like long COVID,” she said.

The recent experience of the East Coast, which sometimes provides a roadmap for coming trends in California, also suggests reason for caution. New York City’s rate of new weekly coronavirus-positive hospitalizations last week was nearly 75% higher than LA County’s, and the rate of weekly coronavirus-positive hospitalizations in New York City was nearly triple that of LA County’s.

Vasan said hospitalizations would need to worsen significantly for New York City to determine its COVID-19 threat level would need to be strengthened again.

“With the rising risks, we need to take rising precautions. New Yorkers, mask up when you’re indoors, regardless of whether you know the vaccination status of the people around you,” Vasan said.

As a result, on Monday, New York City raised its COVID-19 threat level from low to medium, and officials on a city website said that if the threat level eventually is raised to high, the city would consider instituting a mask mandate.

California lifted its own statewide indoor mask order in mid-February, but the state Department of Public Health has consistently strongly recommended the practice ever since.

Unlike some of his counterparts in Southern California and in New York City, however, San Francisco public health director Dr. Grant Colfax did not seem particularly concerned Tuesday about his city’s high case rate, given its exceptionally high vaccination and booster rate and low hospitalization rates.

San Francisco’s hospitals have never been strained as much as Los Angeles County’s or New York City’s during the pandemic. Since the start of the pandemic, for every 100,000 residents, 99 died from COVID-19 in San Francisco, compared to 314 in LA County and 482 in New York City.

“Our case rate and number of hospitalizations have increased. But the hospitalizations — and particularly the ICU numbers — have not increased to a degree that we’re concerned about,” Colfax told city health commissioners.

Dr. Robert Wachter, chair of UC San Francisco’s Department of Medicine, said he’s concerned that the test positivity rate for asymptomatic patients at UCSF’s hospitals has tripled in the last few weeks, and is now at 3.4%.

That translates to an 82% chance that at least one asymptomatic person at a 50-person party in the San Francisco area is infected and contagious with the coronavirus.

watcher tweeted that he’d like to still avoid getting infected, as he’s worried about the chances of suffering from long COVID and other lasting effects that would increase the risk of heart disease and diabetes. He said he’d strongly favor dining at restaurants outdoors instead of indoors, although he’d still eat indoors in a small group, “recognizing it’s a risk, but it seems worth it.”

“You should make your own choice, but do it [with] eyes open: There’s a lot of COVID out there,” Wachter wrote.